Birds You are Likely to See on your Sea Kayak Adventure

Bald eagles, herons, kingfishers, and more. Keep your eyes on the skies to capture the numerous pacific northwest birds you will encounter on your kayaking adventure. 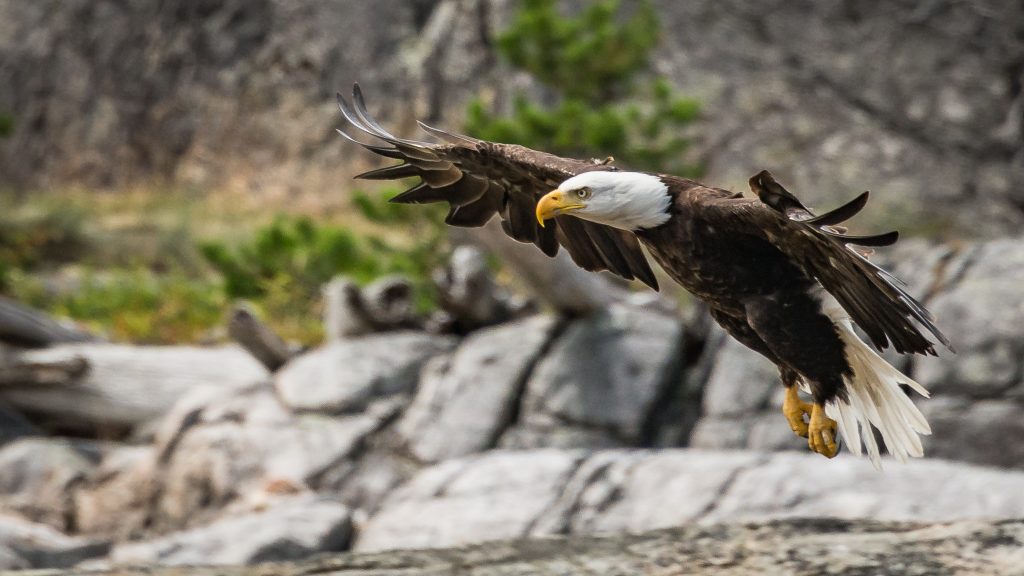 Bald Eagles are a common sight on a Wildcoast kayaking trip. Their signature white feathered heads make them easy to “spot” against the rich green backdrop of a treed Western coast, even from a kayak. More difficult to spot, however, are when they are juveniles, and maintain an entirely mottled brown and tan appearance.

Their diet consists mostly of fish, but are not one to turn down opportunity, and will just as happily feed on carrion. Their natural habitat are rugged coastal regions and inland rivers and large lakes, where they can “fish” perched in trees or from the air. The bald eagle mates for life, and if they were to lose a partner, are unlikely to match again. Female bald eagles, weighing up to 14 lbs, are much larger than the males (7-10 lbs), and maintain wings spanning 6-7 ft, so you can imagine the massive nests they keep, and will maintain over their lifetime, if the tree will support it! 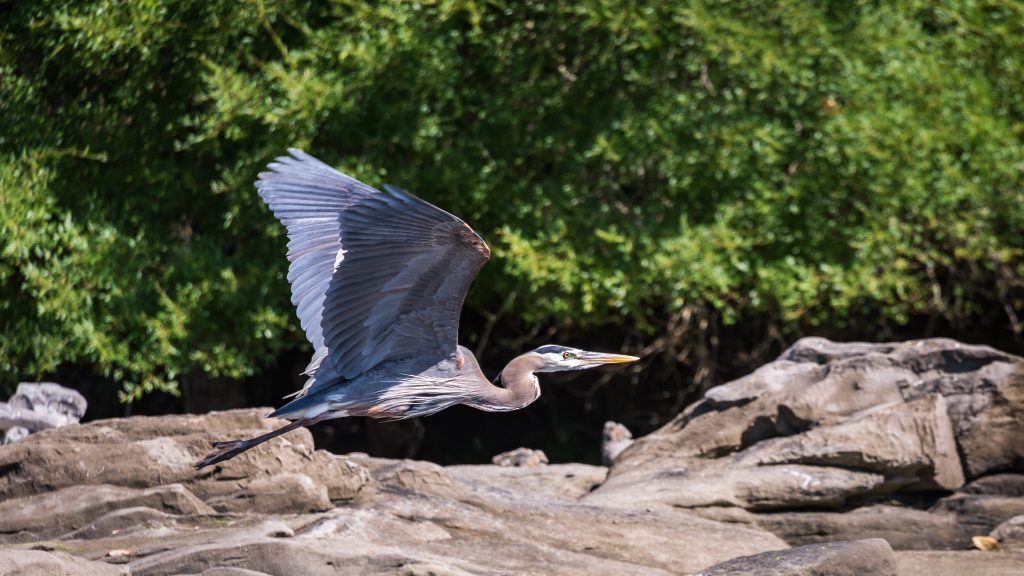 The Great Blue Heron is a wading bird found near open water, estuaries and marshes. It is said that 90% of their time awake is spent stalking food! They have a huge wingspan of upwards of 6 ft, a massive spread for a 5-6 lb bird (to compare, the bald eagle is twice the weight, with a 6-7 ft wingspan). For a bird built to spend considerable time standing in water, it is sometimes strange to see them perched in trees. There is no denying how majestic the great blue heron are, flying in an almost silent glide, their necks tucked in, and long legs trailing behind them, until maybe, you hear the sound they make. I guess you can’t have it all.

It is likely you will hear a Kingfisher, with it’s loud, mocking chatter, before seeing one. Relatively small birds, with heads that seem too large for their bodies, these blue, black and white-feathered birds have a fierce beak, almost like an arrowhead, that they use to fish with. Making them harder to spot, the kingfisher has an extremely fast and sporadic flight pattern, reminiscent of a hummingbird. The Belted Kingfisher can be found along both fresh and salty shorelines, as they feed on both fresh and saltwater fish that they pluck out of the water after diving in to retrieve them! 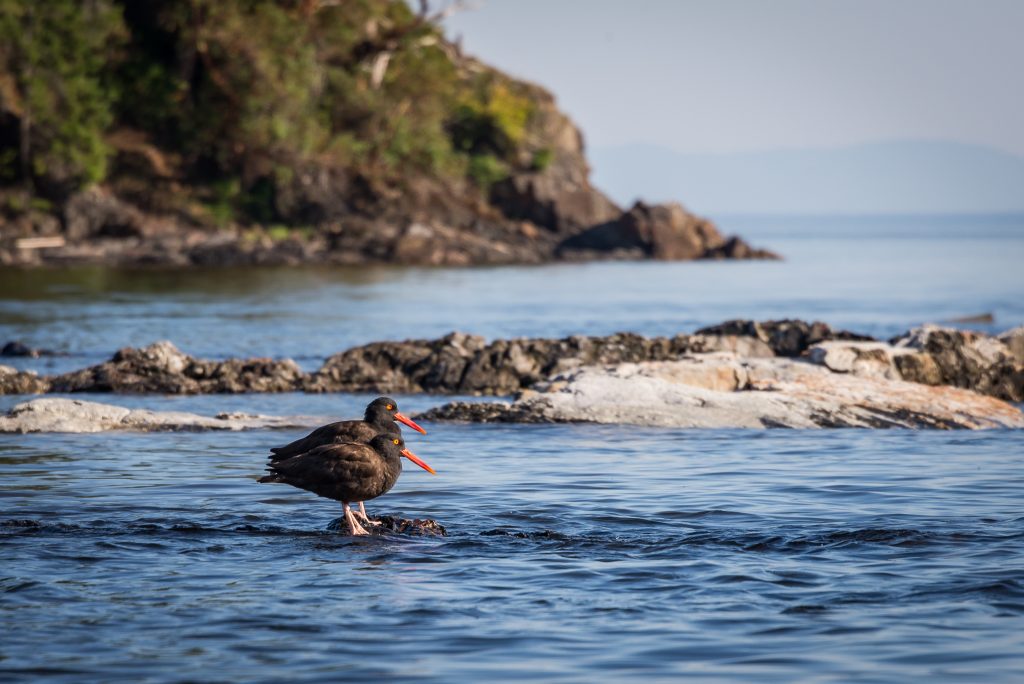 The black oystercatcher has startling features: their pitch black body, contrasting bright orange bill and beady orange eye, make for easy identification along the shoreline. Now, I’m not entirely sure how fast oysters run, but the black oystercatcher is built to catch them. Dubbed the Kayak Guide’s alarm clock, the oystercatcher’s signature series of peeps, followed by the hammering of their beak when accessing an oyster for breakfast, may well be the first sound of daybreak. Their commonality is an indicator of a rocky coastline rich in shellfish and other marine life. The black oystercatcher ranges only along the Western coast of North America, preferring rugged and rocky terrain over sandy shores. It’s sleek beauty, functionality, of course, and two words put together to make one, make this bird one of Wildcoast’s favourite.

Martens, nighthawks, ravens, songbirds, gulls, ducks and other seabirds are all other species common in our region, and just some of the pacific northwest birds you may see on your kayak adventure. Our naturalist kayak guides are additionally equipped with reference books while on trips, and you may even flush out an avid birder in your company of paddlers, so if you see a bird you’re unfamiliar with, we encourage you to “meet your neighbour” by learning its name and something interesting about them!

For more information about the birds of North America, the National Audubon Society provides some fantastic information to help you learn more or download Seek, a free app by iNaturalist  that allows you to identify and learn more about the flora and fauna around you, wherever you are!  The Shazam of nature.  A great tool to quickly identify the things in your own backyard, to discoveries on your own adventures.