Wildlife in the wilderness of British Columbia’s Vancouver Island, is as rich as it is diverse.  It does not take long to go from human-habited areas to wild sweeping landscapes of deep forested mountainsides and windswept rocky shores.

While the “call of the wild” is often what draws newcomers, and what has drawn us here, it is vital to be familiar with the wildlife around us that we may, or may not, encounter, so we can respectfully co-exist.

Whether you see these animals on a Wildcoast kayaking trip, or you don’t see these animals due to the precautions taken, below are just a few of the fascinating creatures that call the wilderness we explore in the Pacific NorthWest, home.

If you see an otter, in the sea, one would naturally assume it to be a “sea otter”  Well my friends, nature throws us some curveballs, and that otter you see swimming around in the harbour, and hauling out of the salty chuck, onto the rocky shore,  is actually – a river otter.

While BC does have a slowly recovering “sea otter” population (they were hunted to near extinction for their remarkable fur), sea otters are only found on the northwest coast of Vancouver Island, and further north up the coast into Northern British Columbia. River otters, on the other hand, are quite prolific in protected harbours and shorelines of the inside passage.

With their large lung capacity, webbed feet, ability to close their nostrils and ears, and dense water repellent fur, which they must groom often for functionality, they were built to swim.

They can be considered a nuisance to waterfront home-owners due to their “distinct” odour, often noticed when river otters den under a house.

While their populations are stable, river otters are sensitive to marine pollution: oil spills compromise their fur making them susceptible to hypothermia, and as carnivores, some types of marine pollutants biomagnifies in their bodies like pesticides and heavy metals.

More Info: check out the Sierra Club of BC for more info about River Otters

Thought to be a different species than mule deer, it is now widely considered that black tailed deer are a subspecies of mule deer, along with sitka deer, found in further north coastal regions. 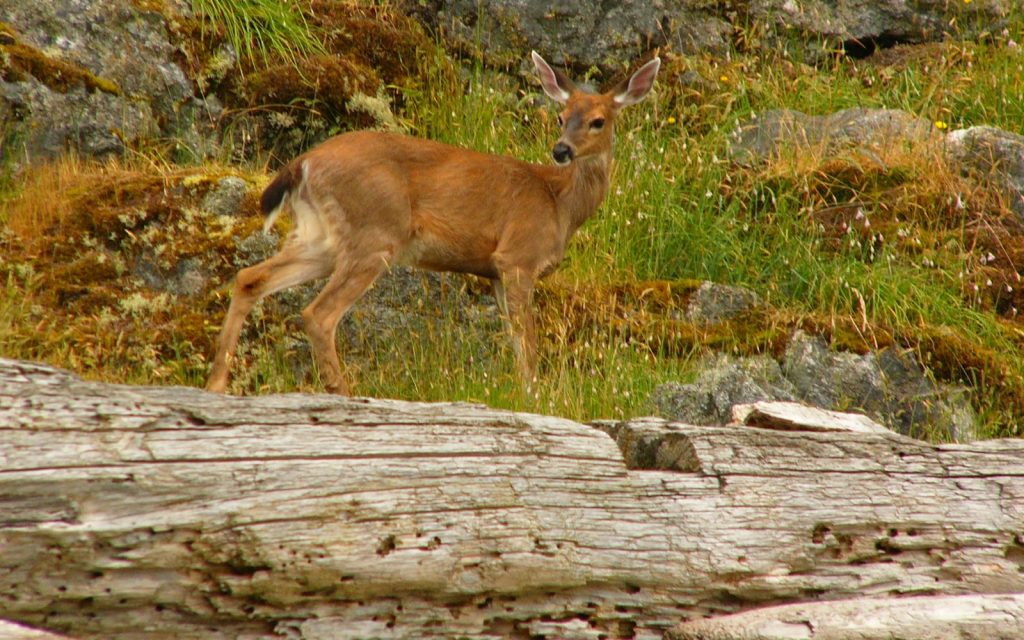 Black tail deer are very common in our region, and the greatest threat to domestic gardens or landscaping, requiring high netting or wire fencing to keep them out of food producing gardens.

With such healthy black tail deer populations, it means that predator species like cougars and wolves are well fed, and not often looking for other food sources.  A naturally maintained food chain is the best way to prevent over populations in prey animals, and incidents from predators on humans or domestic/farm animals.

More Information:  check out the Sierra Club of BC for more info about Black Tailed Deer

Black bear is the most common of the three bears found in Canada and Vancouver Island is considered to be the densest black bear habitat in the world. While the population is stable, this claim is in no way a statement of overpopulation, but rather indicates a greater area of ideal habitat.

Attractant management is key when aiming to reduce wildlife encounters with humans in order to keep both bears and humans safe. Residents of bear country have a responsibility to manage attractants to prevent bears accessing unnatural food sources in the areas that border bear territory.

Other threats include loss and fragmentation of habitat, over-hunting, climate change and poaching. Generally shy, black bear attacks on humans are very rare.  They are more apt to be aggressive when they have cubs.

When exploring the wilderness, it is imperative to keep black bears healthy and wild by preventing the offering of an easy food source (and the mass destruction of good camping equipment!)

If you encounter a bear, make yourself big, make noise, and back away.

A note on Grizzly Bears: while grizzly bears were not thought to be on Vancouver Island, more recently, sightings have confirmed some individuals have swum to the island likely seeking new territory. Grizzly bears have large home ranges of anywhere from 25 to 700 square kilometres. While not territorial, they will defend their personal space and food sources.

As black bears on Vancouver Island are generally a deep black (they vary in colour in other regions), grizzly bears can be identified by being brown in colour. Grizzlies also have a distinctive hump at their shoulders.  As grizzlies are less predictable than black bears, it is especially important to keep attractants down and to avoid any encounters.

More Information: check out WildsafeBC for more information on Black Bears and Grizzlies.

Their piercing eyes, powerful physique, and ability to be extremely stealthy for their 60-80 kg size, is description enough to elicit fear, though attacks on adult humans are rare. Also called puma or mountain lion, they are commonly referred to as cougar in the Coast British Columbia region.

Approx 600-800 cougars are estimated to reside on Vancouver Island, making it the highest concentration of cougars in the world, with higher density in the Northern half of Vancouver Island.

Incidents or encounters are generally due to young cougars that have not yet learned to hunt effectively, or older animals that can no longer hunt in the wild.  Cougars are otherwise shy of humans, and are just as happy to avoid you.

Cougars are particularly vulnerable to habitat destruction, and do not adapt well to fragmentation of their range by roads, towns/settlements, and farmland.  This pushes them further into the forest, and often into conflict with other Toms.

If you an encounter a cougar:

it is usually a scenario as mentioned earlier.  Keep calm, make yourself look as large as possible, do not kneel, and back away slowly, keeping the cougar in view and allowing a clear exit for the cougar.  Sudden movements, running, or turning your back can provoke an attack.

maintain its eye and use a loud voice to speak to the cougar as you back out of the area or yell for assistance.

always respond back aggressively, maintain eye contact, yell and make loud noises, reach for sticks or rocks that could be used as a weapon without making yourself vulnerable by bending over or crouching.

More Information: check out WildsafeBC for more information about Cougars

Stay Wild and Leave No Trace

There is no doubt about how wild Vancouver Island is. By knowing what kinds of wildlife call it home, we can co-exist in a way that is responsible and safe for both humans and animals.

Using Leave No Trace methods, viewing wildlife on the shore from kayaks, and at safe distances, and being informed and prepared campers in the backcountry is how Wildcoast strives to appreciate the wildlife we share the woods with.

Camping in designated wilderness campsites, proper food storage and garbage practices, prevent unwanted encounters, and the acclimation of wild animals.  Do not ever feed the wildlife on a Wildcoast kayaking tour or your personal camping trips.

Wildsafebc says by knowing where wildlife is and what is bringing it in, we can all do our part to keep our wildlife wild and our communities safe.