British Columbia’s Inside passage between Vancouver Island and Canada’s West Coast mainland is a sea-kayaking paradise with a lifetime of routes to explore. There are trips that are suitable for all skill levels of sea kayakers.

Sea kayak vacations summon visions of mountainous horizons, silent waterways, and hidden ocean-side camping spots under blankets of stars. While there are many colourful and majestic scenes above water, equally intriguing are the vibrant and amazing creatures that make up the inter-tidal landscapes below us!

Sea creatures are numerous in species and diversity. Here are 5 of our favourite sea creatures that you’re sure to see on a Wildcoast sea kayak vacation.

Prolific along our coast, you may get to see these creatures as you’re getting into your sea kayak! 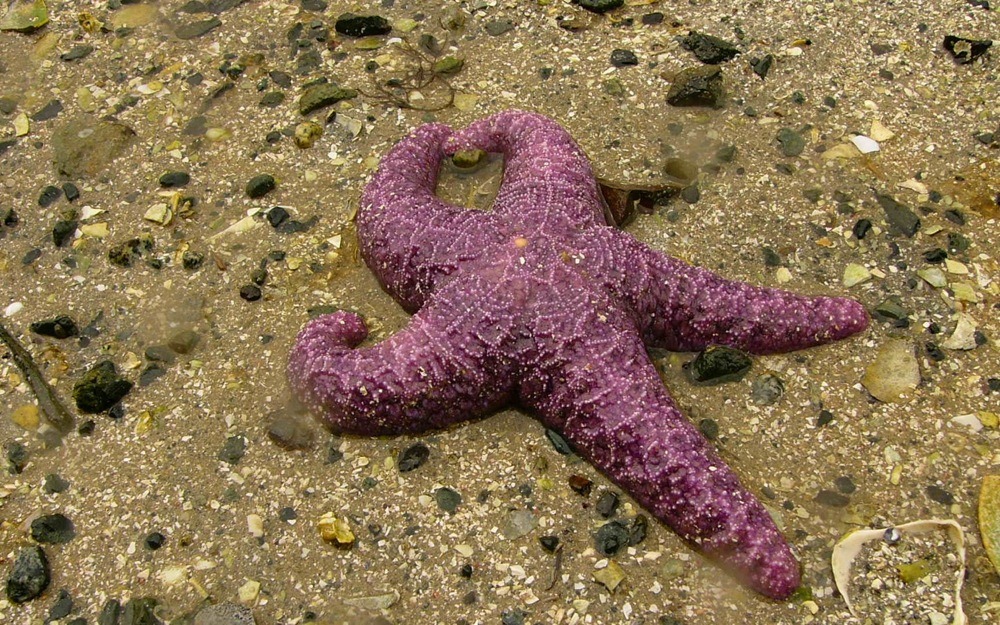 Their flamboyant disregard for any sort of camouflage make them stand out against their more subtle-hued background, and easy to spot! To put it simply: they’re fun! AND they’re fascinating.

Most distinctly bright purple, ochre stars also come in orange, pink or brown. When sea kayaking, it’s not uncommon to see ochre stars in groups, often stuffed in rock crevices. Commonly having five legs or “rays”, they also have the ability to regenerate rays taken by predators: which are limited, but include sea otters and seagulls. They also have a tiny eye on the end of each ray! Ochre stars have extremely rough skin, with small dull spikes on it – forming a star pattern in the centre. They have hundreds of tiny tube “feet” that they use to shuffle around, affix themselves to rocks, and to pry open the shells of their prey.

These hardy sea stars live on barnacles, limpets, snails and mussels, and pretty much anything else they can scavenge. Another cool fact? Their stomach literally comes out of their body, acquires it’s food, and returns it back into it’s body!

Weird, right? These sea creatures are one of my favourites because they are SO weird! In stark contrast to the ochre star, a sea cucumber’s spiny underwater appearance is betrayed when touched or brought out of the water. When sea kayaking close to gradient shorelines, keep your eyes peeled below you for these red and orange spiked-tubes! 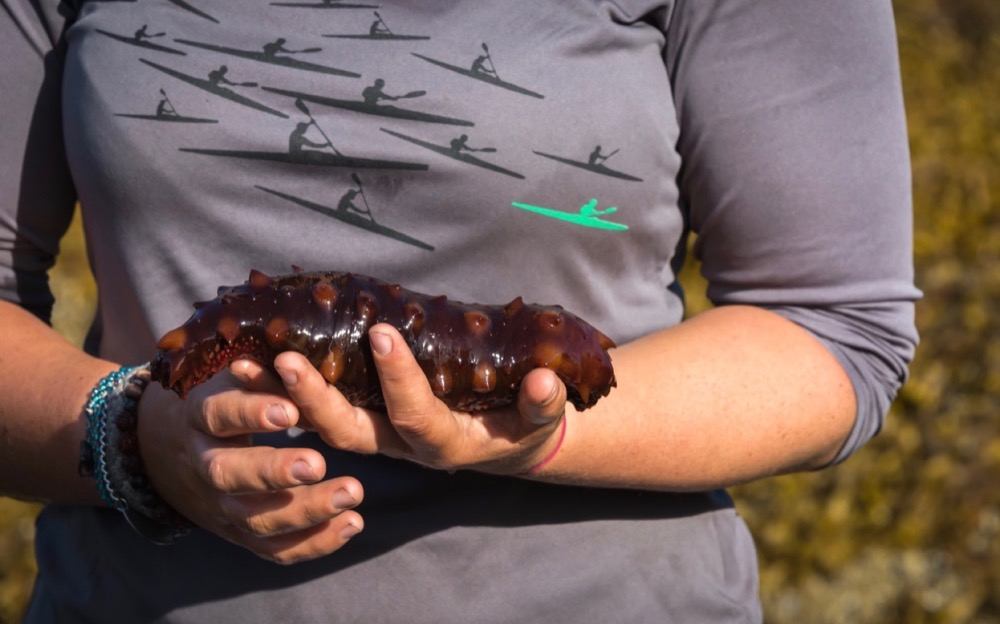 Completely boneless, the rather gelatinous giant California sea cucumber gets its shape from the sea water that is pumped through it from (get this..) its butt! Brought in from, uh, behind, the sea cucumber’s cells are oxygenated using respiratory branches that pull oxygen from the sea water acquired by its anus. The sea cucumber eats algae and other organic bits it gets from sifting through the sea floor with it’s tube feet. It’s digestive system not that different in function from an earthworm: recycling!

These are the largest jellyfish in the sea (though the ones you’ll see while sea kayaking here will be in the 30-40 cm range). They’re also the only ones in our kayaking region that can issue a sting you won’t be too quick to forget – whether the jellyfish is dead or alive! So keep this in mind when swimming or kayaking by one, or before you go poking one washed up on the beach. 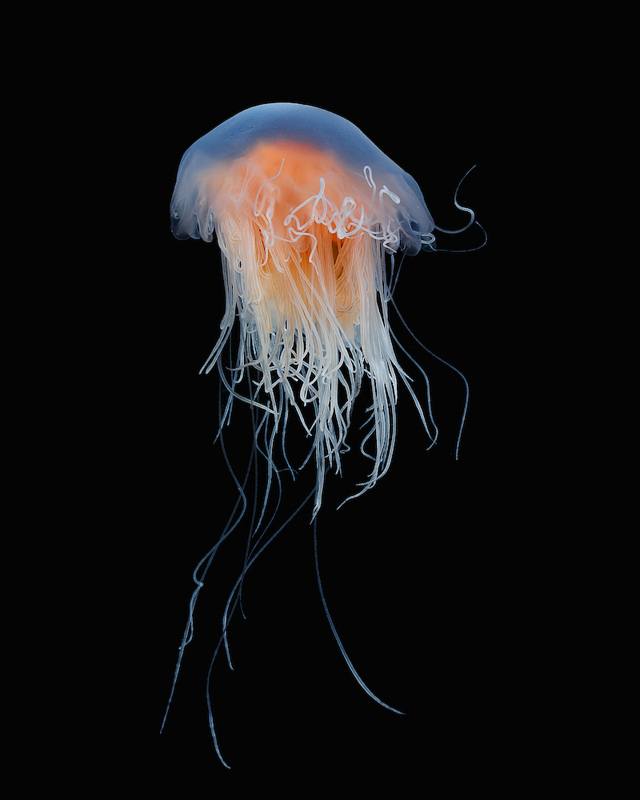 Whether for the red “bell” and cloud of tentacles that resemble a lion’s mane, or it being a “King”-sized jellyfish, it is aptly named and one you’ll remember. Seeing a lion’s mane jellyfish swimming is a beautiful sight, with their long tentacles and beautifully coloured bell dancing just below the surface.

The rocky shorelines of the Pacific Northwest make prime habitat for the sea urchin. It’s easy to see why the sea urchin is also known as the “hedgehog of the sea”. Their long stiff spines protrude from their ball-like shell or “test”, where the spines pivot from and aid in movement. Amid the hard spines, are adhesive tube feet that allow them to move or adhere to rocky surfaces, much like sea stars. These deep purplish-red or green spiky balls can be seen from the surface and often cluster together in urchin beds. They are an important part of the ocean’s eco-system as they eat algae found on the rocks. 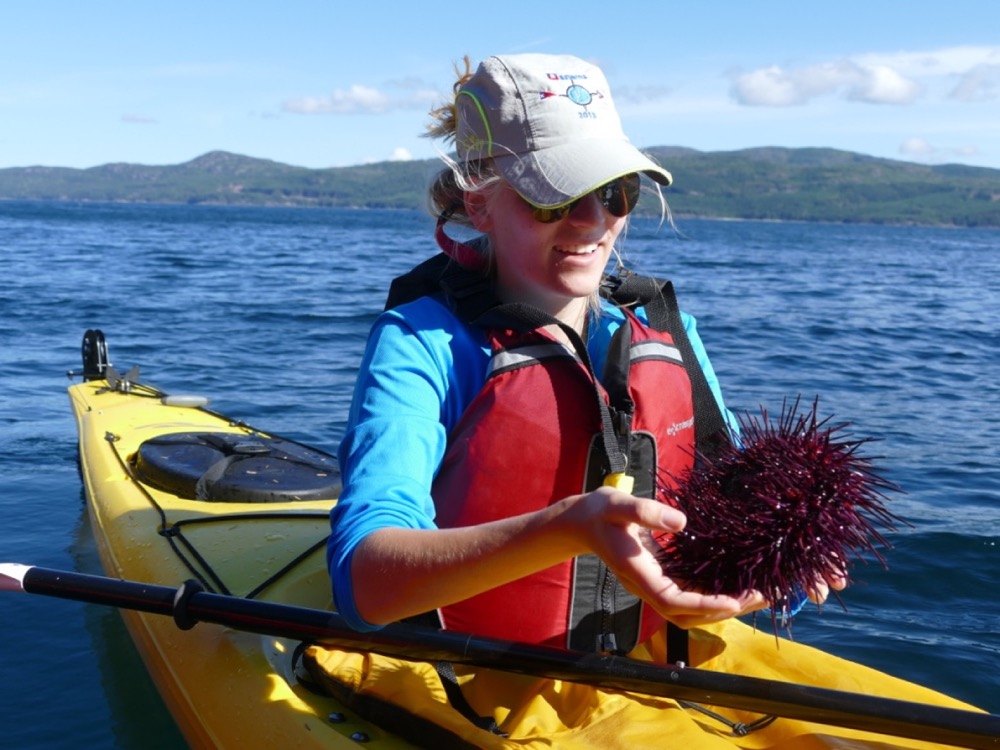 They are prey to gulls and a favourite feast for otters, despite their intimidating appearance. Equally intimidating is their jaw and tooth configuration called “Aristotle’s lantern” that sea urchins use for everything from chewing to literally boring out holes in rocks for further shelter.

Interesting fact: sea urchins do not have eyes.

This tasty shellfish is actually an introduced species that has almost replaced the native Pacific oyster. You’ll likely see these before you even have a chance to get in your sea kayak, as they are often among the stones on the more pebbly beaches. They are “filter-feeders” and while they “clean” our oceans, they are also sensitive to water quality and susceptible to the toxicity in our oceans: even retaining toxins in their flesh! So while offering many nutritional benefits, it is important to be aware of harvesting closures before consuming. Algal blooms, which can happen in the warmer months of summer, create a higher level of toxins that build up and remain in oyster flesh, and is known as “red tide”. This can be fatal to humans. 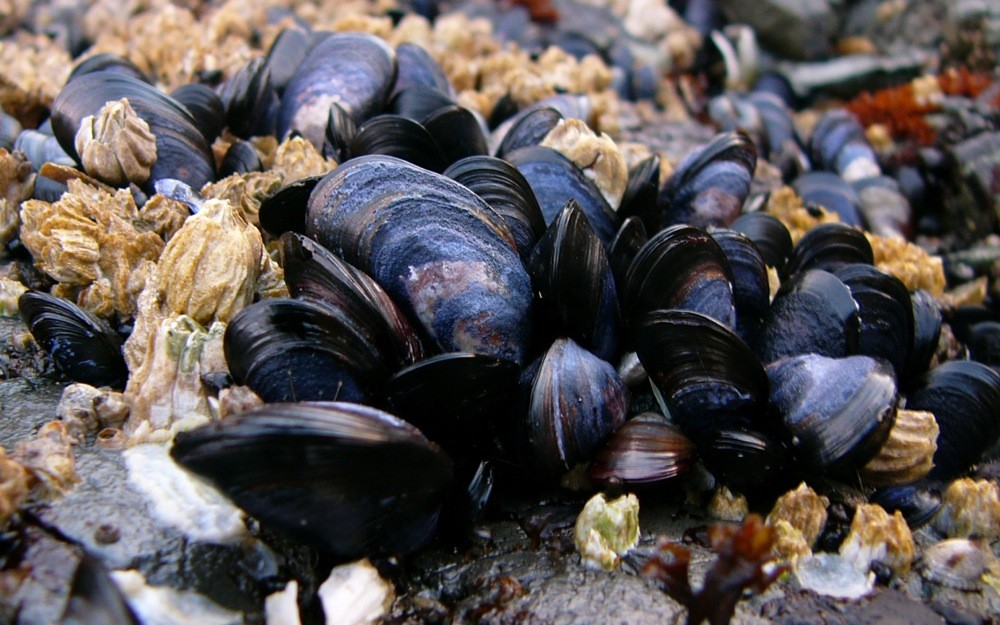 An “oyster farmer” is a popular type of farmer here on Quadra and the Discovery Islands. Our Discovery Islands and Desolation Sound sea kayak vacations paddle in waters which host sustainable oyster farms: the livelihood of many of our friends and neighbours. Some guests will even get the pleasure of meeting these farmers and learning more about this delicacy! Check out this video and meet one here!

And while this oyster is plentiful, you’re unlikely to find a pearl. Though, that’s not to say it’s never happened!

See other sea creatures you may encounter and learn more cool facts here and here.

Check out which Kayak Vacation is for you!