The population of humpback whales has seen an amazing recovery of recent. There are now estimated to be upwards of 21,000 humpbacks in the northeast Pacific Ocean alone. The north Pacific population of humpback whales makes long distance migrations. They range from winter breeding grounds in southern latitudes (Hawaii, Mexico, and Southern Asia) to northern feeding areas from California to Alaska and Russia where they spend the summer months..

The humpback whale population off northeastern Vancouver Island, reached 86 in 2018, up from seven in 2004. Researcher, Dr. Barrett-Lennard, director of the marine mammal research program at Ocean Wise,  says the increased humpback population is most likely due to an abundance in prey in BC waters. Humpbacks feed largely on krill. This surge is is likely humpbacks coming from Alaska waters, or more northern portions of B.C.’s coast like Haida Gwaii. 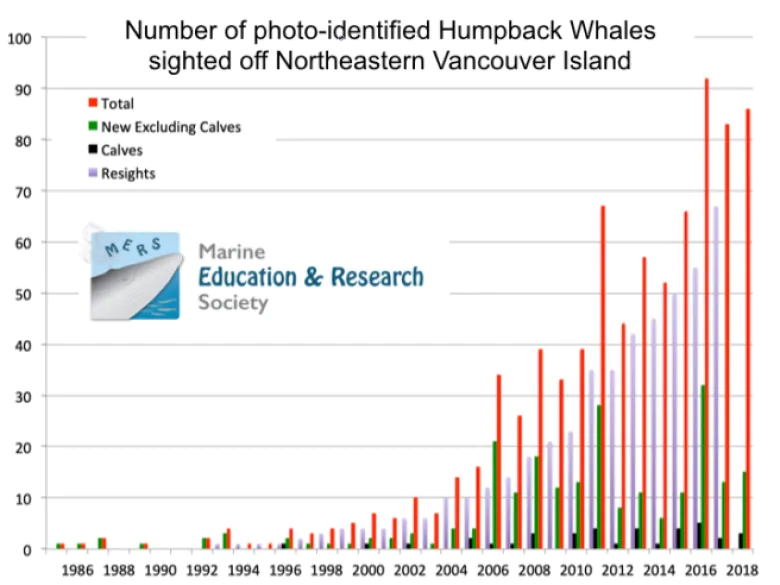 The Marine Education and Research Society provided the above chart and has three staff members who collect data through surveying humpbacks. They also enlist boaters who send pictures, locations and times of where humpbacks are spotted. The researchers identify the whales by the undersides of their tails and their dorsal fins. Read more about their research here.

Below are a few things we do know about humpback whales.

4 Interesting Facts about the Humpback Whale *

People are both enthralled with encountering a humpback whale as well as concerned about their well being. One of the greatest threats to the species is getting entangled in fishing gear. When detected, humans are quick to respond to a whale in dire straits. Here are a few notable accounts of people freeing Humpback whales from fishing gear:

More information about the Humpback Whale

Research continues to reveal more and more about Humpback whales. To learn more about the ongoing research about humpbacks in Canada visit the MERS website (Marine Education and Research Society) and the BC Cetacean Sightings Network.