Many wonderful events have occurred in the past few years to enhance our understanding of killer whales. As a result, changes in how humans interact with whales is continually improving. Here are a few recent examples:

January 2021 – A group of orcas that hasn’t been seen in 20 years has returned to B.C.’s central coast. The group, part of the A5 pod, are a part of B.C.’s northern resident killer whale population. They brought along a baby as they returned to their traditional winter foraging grounds in British Columbia waters. Read more details.

December 2020 – National Geographic reported on 7 wins that gave us hope for the environment in 2020. Two of those wins related to the recovery of whales worldwide, something we have seen firsthand with the Humpback Whales in our region. And advances in ocean protection as 14 key nations (including Canada) committed to protect ocean health. These stories inspire us to look forward to many great days on the water in the coming years.

September 2020 – the Marine Mammal Research Unit at the University of BC are using hydroacoustics to assess food abundance for orcas by placing camera tags onto whales to record what they see and hear. Take a sneak peak into the life of a Northern Resident Orca Pod in this video (these whales are members of one of the pods that swim by Wildcoast’s Orca Camp during the summer months). This important work of documenting the abundance, genealogy, sociality, demographics, and health of these amazing whales will provide a better understanding of the best ways to protect the whales. 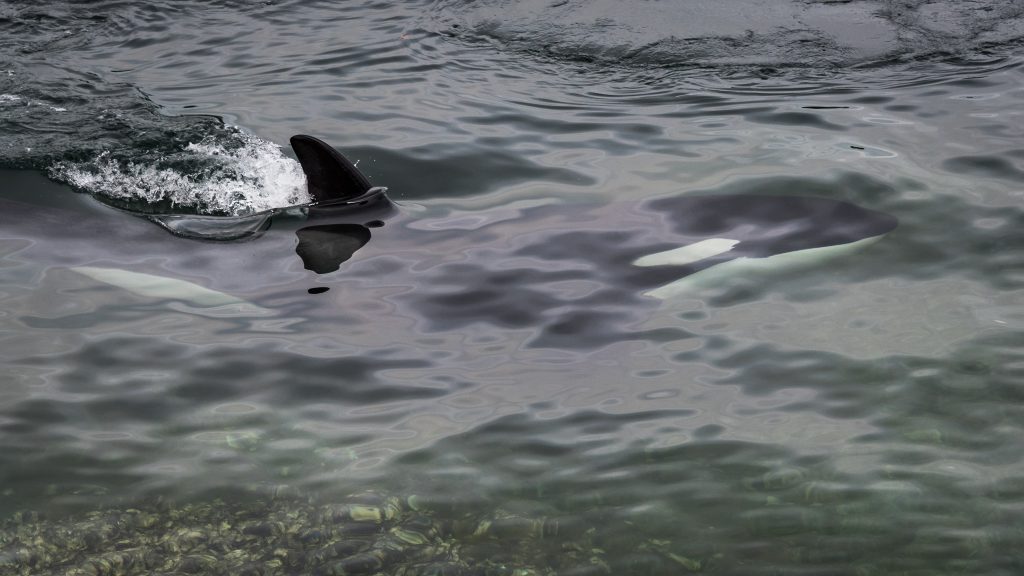 December 2019 – From July 6 to October 15, 2019, the Port of Vancouver through its ECHO Program carried out voluntary initiatives in the Salish Sea to support the Southern resident killer whale recovery efforts. Deepsea vessels with a B.C. Coast Pilot aboard had a high participation rate (1,279 of 1,551 ships) in the slowdown trial area over the course of the initiative.

December 2018 – A ground-breaking government-to-government process (by the Province of British Columbia and the ‘Namgis First Nation, the Kwikwasut’inuxw Haxwa’mis First Nations and Mamalilikulla First Nation), has delivered recommendations that will protect and restore wild salmon stocks. The recommendations will allow an orderly transition plan for open-pen fish farms to create a more sustainable future. This is good news for killer whales as wild salmon is their favourite food.

Also in December, two more areas of B.C. waters have officially been deemed “critical habitat” for killer whales. The designation means the two areas of ocean off the coast of BC are now legally protected against habitat-destroying activities that could hinder the survival or recovery of the whales.

October 2018 –  a bill to outlaw keeping cetaceans like whales and dolphins in captivity has cleared the Canadian Senate. First introduced in December 2015, the bill that would Ban Captivity of Whales includes fines of up to $200,000 could be imposed on parks flouting the law — a sum set deliberately high as a deterrent.

April 2018 – As part of an initiative to protect Canadian coasts, the federal government announced $12.2 million to preserve marine mammals. Of that, $9.1 million will go towards new technology to detect the presence of whales, while $3.1 million will fund four research projects dedicated to studying the impacts of underwater noise and reduction of prey on marine mammals. Lance Barrett-Lennard who is head of a $1M long-term research project assessing the health and condition of killer whales stated that “The biggest value of this particular funding is it extends for a full four years and that’s just a long time horizon… the value that really comes from these comparisons if we’re looking at change over time.”

Also in April, the North Island Marine Mammal Stewardship Association (NIMMSA) provided over $35,000 in grants to five different research, education, and conservation organizations. Each year, these funds include contributions from Wildcoast. Projects include; updating the catalogue of humpback whales, replacing a research structure across from the Robson Bight Ecological Reserve, replacing two hydrophones and computer equipment for killer whale acoustic data collection, and analysis and publication of data on salmon populations as well as vocal behaviours of minke whales off northern Vancouver Island. 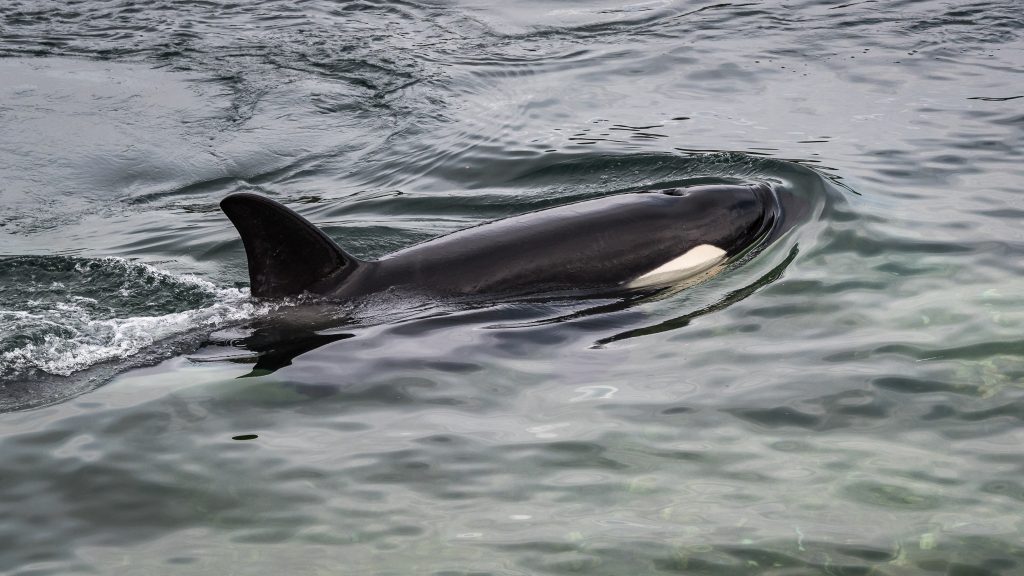 January 2018 – The Vancouver Aquarium announced it will no longer keep whales and dolphins in captivity. The change will allow them to focus efforts on the Aquarium’s research and conservation work. Part of this effort is the The Marine Mammal Rescue Centre which cares for marine mammals found injured, ill or abandoned, until they can be returned to their natural habitats.

Newborn orcas are around 2 meters long and weigh approximately 150 kg. There were 2 new baby orca spotted in the Transient Orca population in 2018. 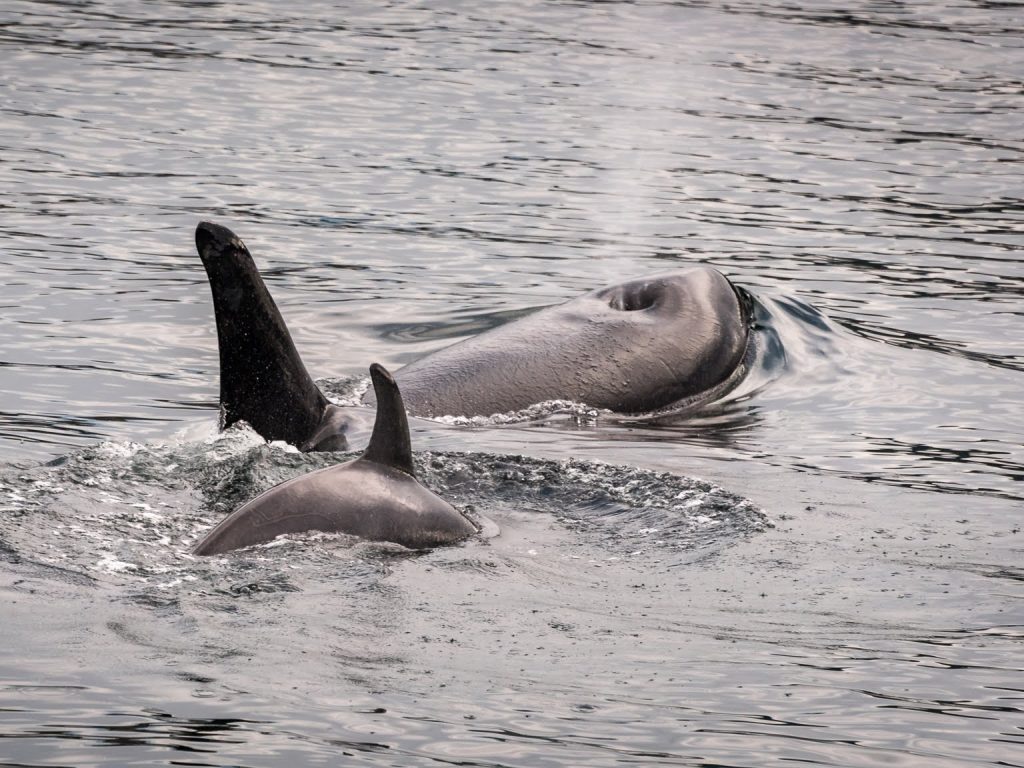 The minimum population size for northern resident killer whales is estimated to be 310 individuals (Towers et al. 2020).  Between 1973 and 2019, the Northern Resident Killer Whale population experienced periods of both growth and decline. The 7% decline in population size between 1998 and 2001 coincided with a reduction in the abundance of 5 primary prey for this population, Chinook salmon (Ford et al. 2010). Since 2002, no annual decline in total numbers was documented until 2018 when the northern resident population showed a growth rate of -0.3% (DFO 2019).  Chart below from photo-identification catalogue (Towers et al. 2020).  It is comprised of three clans A, G and R, with a total of 16 pods and 33 matrilines. See the 2020 Photo-identification Catalogue for a full list of the Northern Resident whales and matrilines. 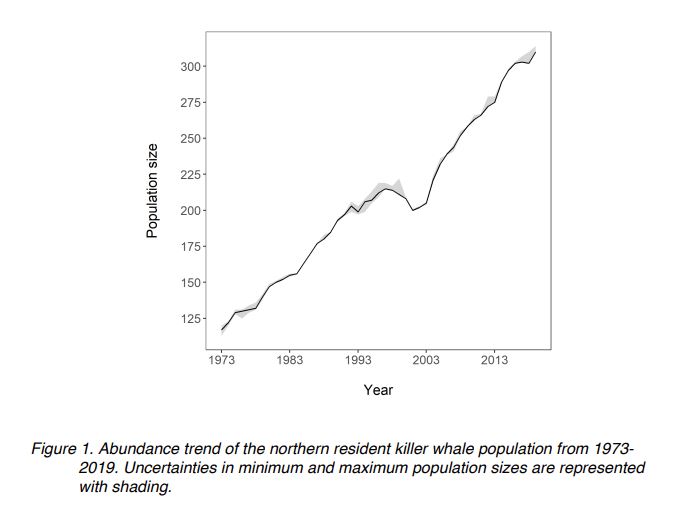 Chris Wilton’s Youtube video of a chance sighting of Northern Resident Orcas rubbing their bellies on a beach directly in front of him and his friends was a viral hit with over 1.5 million views and counting.

Explore.org added OrcaLab’s live camera feeds to their website. The network of underwater microphones, known as hydrophones, cover 50 square kilometers (20 square miles) of core orca habitat on British Columbia’s west coast. As a bonus feature visitors can sign up for text alerts (on the left hand side as you scroll down the explore.org page), which will send notifications when the orcas are active.

In addition to the fantastic work by professional research, The B.C. Cetacean Sightings Network (BCCSN) has developed a platform for everyone to provide information they have about whales.  The free mobile app called WhaleReport to make it easy for anyone to collect and report sightings.

The network has over 4,300 observers across British Columbia, ranging from whale watching operators, lighthouse keepers, researchers, or even recreational boaters gathering data on the occurrence of whales, dolphins and porpoises in BC waters. Throughout the year the BCCSN presents to thousands of British Columbians at schools, community groups, professional associations and festivals.

Want to learn even more about killer whales?

Check out the resources we have gathered on our reference page: The Magnificent Orca.

Want to see killer whales up close in the wild?

One of the most peaceful, non-intrusive ways to seek out whales is on a kayaking trip in Killer Whale territory!

Check out all the great available options to join a Wildcoast Orca Camp trip for your next outdoor adventure in the wilderness.

If you enjoyed this post and are thinking about joining a Wildcoast trip in the future, subscribe to our newsletter for exclusive access to special deals!